Recently SIGNAL, Code Club Aotearoa, and Christchurch Woman in Tech hosted an event called CODE REBEL with Ally Watson. Ally is the inspiring CEO & Co-founder of Code Like a Girl, which is an Australian based social enterprise providing girls and women with the confidence, tools, knowledge and support to enter, and flourish, in the world of coding. Ally was in NZ for the 2018 New Zealand International Science Festival in Dunedin (6th to 15th July), where she also appeared at a Women In Tech event alongside Kylie Robinson, a Dunedin based tech founder and Managing Director of Igtimi,  whose Yachtbot product assisted the recent successful America's Cup campaign.

Ally Watson’s story is similar to a "rags to riches" feature film. Raised in a small working class village in Scotland to being named by the Sydney Morning Herald as one of Australia’s nine most influential female entrepreneurs of 2017. Ally’s original dream was to become an artist, only to be rejected from art school twice in two years. Armed with the determination to get into University, the aspiring artist enrols in a Software Engineering course… turns out she loved it and well the rest is history! Ally is passionate about removing the stereotypes.

Ally is an incredibly engaging speaker and the audience, which was a mixture of all ages, were treated to an inspiring evening of insights and strategies to boost more diverse  participation in the tech sector worldwide.

SIGNAL’s goal is to boost NZ's tech sector capability in New Zealand, as it is now NZ’s third largest export earner, topping $10 Billion dollars last year. Over 9000 new tech jobs are expected to be created in the next two years. SIGNAL provides tech specific professional training, both for those looking to enter the tech sector, and those who are already a part of this dynamic and diverse sector.

It is through events such as the NZ International Science Festival and CODE REBEL with international guest speakers that SIGNAL hopes to help grow awareness and inspire more people to join NZ’s growing tech sector.  Keep up to date with Signal's news and events via our facebook page! 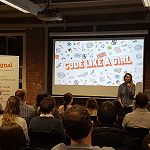 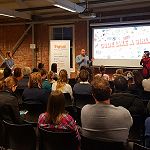 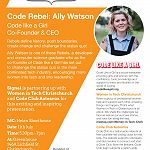 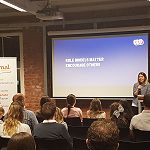