Joining the first Christchurch SHIFT cohort in July 2017, Harry Taylor found himself in a different situation from most tech students. Instead of a male majority cohort, Harry was the only male student in the class.  Harry was joined by Samantha, Felicia, Dewi and Sakinah who were also looking to make the transition into tech and start new careers.  The cohort quickly bonded in the new learning environment and have kept in touch as they have ventured from SHIFT into the world of work.

Harry discovered the impact that technology was having on the world during his Masters in Management study. Having always been curious about technology and having experimented with coding previously, when it came to "What next?" tech was the obvious answer.

Finding out about SIGNAL and the SHIFT programme during his research into a variety of options, what stood out to him was the networking opportunities with the tech industry which is  ingrained in SHIFT, and the small class sizes. The programme also has local tech professionals coming in to meet students, give talks and run workshops. Harry liked how learning linked directly to projects.

Harry found the studio group projects were useful learning opportunities that mirrored what real tech workplaces are like, especially working in an agile environment. Harry explains that learning the fundamentals of programming before starting the projects and then using these skills in the projects was a great learning sequence whilst also doing his own self-directed learning. The flexibility that the studio projects provided, using and developing both front and back end skills, was also beneficial.

Harry said he felt comfortable going into his industry project because of the learning he had done during SHIFT.

“SIGNAL provided me with great industry links which helped me find a tech job and the course made sure I was industry ready.” - Harry Taylor

Harry’s industry project (internship) was with RCG Creations Limited, a Christchurch-based company that specialises in developing software for internet providers.

“The internship was the best learning opportunity for developing my technical skills. At RCG I was able to use their tools, work in an agile environment and work with their clients.”

Harry’s internship project focused on creating a user interface for an operations management system. He used his database and front-end development skills for this project. Harry said his industry supervisor Craig Goodenough was supportive and encouraging. After doing a great job at his internship Craig wanted to keep Harry on and hired him full-time.

Now working at RCG, Harry said having both a background in business and his new tech skills meant he stood out to mentor and business owner Craig, as being a valuable addition to his growing company.

Harry said he would recommend SHIFT to anyone looking for a new career direction even if they haven’t considered tech careers before. 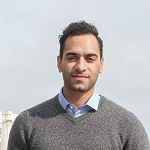