And, after 18 months of Xtend, that’s exactly what they have got.

CerebralFix’s first move was to put in Lean processes; their second move was to put their Head of Studio, Nadia Thorne, on SIGNAL’s Xtend programme – an in work, for work programme designed to build leaders in the tech world.

Nadia is now in the last phase of Xtend, which results in a Master of Professional Practice. Her Xtend project was to stimulate a culture of learning within her organization across the 18 month programme duration.

Nadia says the biggest challenge was the self-reflection process, which is the backbone of Xtend.

“That was difficult – trying to see things from a different angle, understanding how I, as an individual, see things and recognizing that I’m not always right.

I’m more of a production manager and I was the gatekeeper, so I used to have lots of lists. But I had to step back and give up my lists.”

But the effort was worth it. By the end of phase one, Nadia had noticed a culture change rippling through the company as a direct result of the changed way she and her team of artists, testers and developers worked together.

“Historically CerebralFix has employed techniques such as scrum to ensure we delivered, but we were still using a top down management approach, which was not scalable. We are now evolving our methodology to flatten the structure to empower our people. Enabling them to effect changes in our business. This has required a shift in mindset by both the senior managers and the staff.

“Creating a culture of learning and openness means we are more robust, more adaptable, more flexible to change direction quickly, and handle that change well as a company.”

“This change has come with some challenges, when teams that have traditionally been told what to do, now being empowered to take ownership of projects.

But as Nadia pushed them to learn and upskill and take ownership, our team has started to push us and we are acting as facilitators and enablers.”

“Developers were nervous about code reviews, and while we’ve tried to put it in place, we just couldn’t make it happen. But when this was suggested by developers to improve their processes there was immediate buy in from the rest of the team.

Gwyn credits Nadia’s own development as the leading force behind the company’s creative evolution.

“Nadia gave her team the ability to learn, dissect, pull problems apart and then make sense of it; it’s a very tricky skill to teach. And now our team are cross-skilling – an artist can create a prototype, as can a tester – which means we are more flexible, more agile.”

“It’s made us a powerful creative force,” says Nadia with a smile. 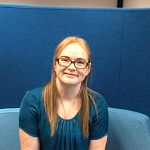