A major overhaul of an app using new technology is a big ask, even for experienced developers. SHIFT student, Bryce White took on this task as part of the Digital Channels team at the Christchurch City Council working on a new version of the Events App.

Bryce and mentor Eden worked together to deliver the new version of the app using React to deliver a clean and modern interface, integrating with the council database of events that is also available via a website.

The app was a great chance for Bryce to consolidate the skills he had developed during the SHIFT programme and to extend them in new areas.

The app is available for both iOS and Android and this meant that the team had to ensure it was extensively tested across both platforms.

Bryce is now contracting to the Digital Channels team at Christchurch City Council and is working on a range of other apps that will be launched over the coming months.  Congratulations Bryce! 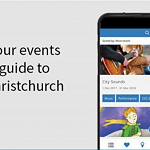